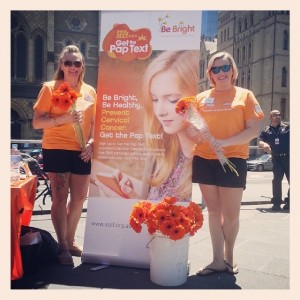 Cervical Cancer is something you hear about but hope you never have to deal with. I was very lucky to grow up with a Mum who always educated me about my body and encouraged me to get regular Pap Tests as she was diagnosed with Cervical Cancer when was pregnant with me. In 2003 my sister Jeanette was diagnosed with Cervical Cancer during a routine Pap Test whilst she was pregnant as well. Jeanette didn’t let me know she was diagnosed until the weekend before her operation however, she kept a level head about everything and had her cancerous cells successfully removed. From that moment on I promised myself to never miss a Pap Test.

In 2009 I noticed a few changes in my body and in January 2010 I had a laparoscopy, which not only diagnosed my early stage of Cervical Cancer but Endometriosis as well.

Throughout the rest of the year I had follow up procedures including multiple LLETZ / LOOP procedures (Large Loop Excision of the Transformation Zone, where a wire loop through which an electric current is passed at variable power settings. Various shapes and sizes of loop can be used depending on the size and orientation of the lesion). Whilst these were uncomfortable, some might even say slightly painful, they are vital in removing abnormal cells. As my infected area was small and accessible, I did not require Chemotherapy or Radiotherapy, which some women have to have depending on their diagnosis.

I had to have another operation at the end of 2010 due to my growth returning but since then, I haven’t had any other issues. Phew! I even had my remission period shortened and was told I could return to having Pap Tests every 2 years but just to be safe I still have mine every 12 months.

These days I work with the Australian Cervical Cancer Foundation, sharing my story and raising awareness, as well as encouraging others to get behind the ACCF on their mission to help women in developing countries get vaccinated as Cervical Cancer is the number 1 killer of women for them.

Cervical Cancer is one of the most treatable Cancers out there. People always say they wish there was a cure for Cancer and we are lucky to pretty much have that for Cervical Cancer. Boys and Girls are now able to get the Gardasil Vaccination, which helps protect against the common HPV (Human Papilloma Virus) strains that cause not only Cervical Cancer in women, but also Cancers such as penile, oral and anal in men. With this vaccine as well as regular checkups such as a Pap Test every 2 years for women between 18 – 80 years old, you can avoid going through what others have before you.

My advice to women is:

And if you’re reading this about to embark on your own journey through treatment, be sure to talk to your female network as well as the support services that are available. I sure did and learnt very quickly just how many people had gone through a similar journey. They were able to offer me a great deal of support and comfort when I needed it most. Keep your head up and make sure you focus on “number 1”, which is you.

To see if Sarah Maree can come to talk at your school, group or workplace, please email info@accf.org.au or visit www.accf.org.au